ABC juice is Apple beetroot carrot juice with ginger and lemon to balance the flavour and taste.

I had this post lying on my draft for a while and thought of making a quick post with it. ABC juice is very popular I guess. I have seen in juice shop menus. Never tried on my own both homemade or at shops. Mainly because I rarely buy beetroots and apples together. So I had some green apples sent by Laxmi along with her lovely meals she sent to me.

And also had some organic beetroots, so thought of making this juice for breakfast. I want to include such juice or smoothies to have my fruits and vegetable quotient. But my day goes as usual in regular routines. Many times thought of investing in a juicer but dreaded about cleaning part. Though I have a dishwasher now, not sure how it would help me cleaning.

Have you ever wondered if juices are really nutritious and worry about the fibers go for waste? It's the main reason I avoid making such juice. But I say something is better than nothing. I have poor eating habits and at times make me feel like atleast I can have it this way. You can always mix and balance it with smoothies instead of having juice always.

Also Vj needs sugar in his juice 😐 We already remove all insoluble nutrients in the juice and we consume just the soluble one. It spikes the sugar level in our blood by itself. On top of it, added sugar? With all the things we read now a days around the different platforms, really makes me guilty to load sugar in diet. It was no big deal when we grew up drinking juice with sugar, but now the scenario has changed.

Because of the lifestyle, it's better to avoid sugar as everyone says, so I agree with it. I can now a days have less sugar in milk (I used to add as much as 1 tablespoon earlier when I drink something) But now I cant, as it feels too much sweet (coffee shop drinks are different story😁😁 and it's only once in a while). I had this juice without any sugar as all the ingredients we use in it have sweetness but gave to him with little sugar. 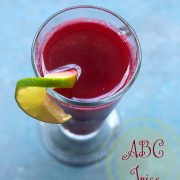 Balance lemon and ginger according to your preference. I like it more as it suppres the raw smell of beetroot.