Eggless French toast is an ultimate breakfast recipe to start your day. With no egg, this is just a breeze to make in the morning. Can be easily made vegan!

When I buy bread, I mostly make vegetable sandwich or just give bread butter jam for Aj. He rarely asks for toasts. Then it will be plain toast with butter or cheese toast for him.

I once had a lot of sugar syrup in leftover without knowing what to do with it. Then I just dipped my bread and made sweet toast and it tasted just awesome!

I thought why not try the Eggless French toast. I always had an eye on Sharmi’s recipe, so I got an idea about the recipe from her’s and made it. It's easily adaptable for an Indian kitchen.

It is very apt for the hurry burry mornings and your kid will love it surely. Or make it for yourself on a lazy weekend morning. It's a treat with all the taste and flavors.

For eggless French toast version using something to coat the bread without making it different in texture. It's corn starch (white corn flour) in this recipe in place of egg.

If you are vegetarian or even if you run out of eggs and want to make French toast, this is the recipe for you. You will sure love it.

Use Brioche bread for best results. Cinnamon and vanilla is also a must in a French toast.

Since it is already egg free, you can make this vegan too if you are one. Just replace milk with non-dairy milk like almond milk. Instead of butter you can use coconut oil or vegan butter.

Serve with maple syrup or agave, instead of honey. Carefully choose your bread too reading the ingredients in it.

Always serve warm with a glass of milk, fruits or even you can serve with your favorite fruit compote. 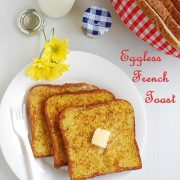 Print Pin
No ratings yet

Eggless French toast is an ultimate breakfast recipe to start your day. With no egg, this is just a breeze to make in the morning. Can be easily made vegan!
Course Breakfast
Cuisine French
Prep Time 5 minutes
Cook Time 15 minutes
Servings 3
Cup measurements

*If you don't have custard powder, replace with cornstarch and 1 teaspoon vanilla extract

1. Firstly, boil milk and mix it well with custard powder, cinnamon, vanilla if adding and sugar in a wide bowl.

Serve hot immediately with honey or maple syrup. You can also serve with fruit compote or whipped cream, fresh fruits .