I always look forward for different podi recipes for idli. I can live with idli and podi. Whatever the side dish I make for idli dosa, my choice will be always podi and I finish with it. I make it only for my sake as both Aj and Vj doesn’t eat idli or dosa with just podi. Aj off late loves podi for dosai, but big no for idli. So it’s just for me, that means never take risk of trying other recipes as it is a project for me. Once I tried a recipe, it became a flop and it was a punishment for me to finish that podi.

Few days back my BIL sent me the video of Rakesh’s Kerala Ramaserry episode of sutralam suvaikalam show. Though I had seen the video earlier when it was telecasted, I was more keen about the idli and never noticed the podi recipe they shared in the video. BIL told it would be sure nice, as it is different from the usual ingredient, mainly rice. I had only a tablespoon of podi in stock so perfect time for me to try it. I tried the very next day itself and shared in my Instagram stories too.

My mom always adds rice to her idli podi, but very less. She says it is for giving that ‘nara nara’ (coarse) texture. So I assumed the podi has to be coarse. But Rakesh pointed out, the podi’s texture has to be fine like a talc. I then again powdered more finer. Believe me, it makes a lot of difference in terms of flavor too. So do grind to fine powder. Also this is meant to be eaten with coconut oil, rather than sesame oil. 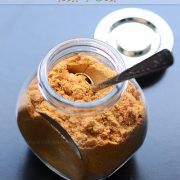 Print Pin
No ratings yet

Serve with virgin coconut oil, idli. I just made Ramaserry style idli podi using my regular idli batter over my idiyappam mesh lined with idli cloth (pour a ladle of batter and spread like a thick dosa and steam).