I once tasted veg nombu kanji in one of my uncle’s house. When I posted my oats Kanji I shared in it as well. Especially with fennel seeds in it, it was very very flavorful,.

In other words, perfect balance of flavors and taste, that I could not even forget now. Similarly, I love poondu kanji or vendhaya kanji that we make often. But this style is very new to me.

Wanted to post for a long time, by saying so, I really mean it. As soon as I posted my oats kanji, I thought I should try Ramzan nombu kanji too and post it. But wanted a good authentic recipe.

I read few articles in news papers about the recipe. I realized, there are a handful of versions as well as it differs in each region, each place they make.

Few months back, that is last December, when the weather was cold, I was craving all of a sudden for this nombu kanji. Therefore I asked few people in my whatsapp, friends and relatives.

Once my relative (Aruna akka) shared this recipe and asked me to try. Worst of all, I lost the recipe, it was few years back actually. So I went back to her shamelessly and asked the recipe again. She is sweet enough to send it right away.

During Ramadan, Muslims fast through out the day. Not even water. Early in morning they have Sehri, a meal they consume before dawn prior fasting (Sawm), before sunrise. After that, they break their fast (Iftar) with Nombu kanji, after sunset.

Though non vegetarian is the most common kanji they serve, This is a vegetarian version I am sharing.

Is video more your thing? Watch the recipe

Before I made this, I tried another version also which almost tasted like porridge version of biryani and not at all same as I tasted in my childhood. After that, never had courage to try again and get an un expected result.

I know the one I tasted there had fennel seeds / soambu in it. I love the flavor it lends to kurma, biryani (south Indian way) and other few recipes. This kanji too.

Problem is Vj hates it like anything. For a person who isn’t demanding at all for the options, I did not want to disappoint him because I planned this for a breakfast as I prepare for the blog post.

Did not want to miss the fennel seeds flavor as well. So added in powdered form. I won’t say I could recreate the same I tasted, but was super delicious and flavorful. Definitely not a kanji form of biryani, no. So we both had it heartily.

With coconut milk and moong dal in this porridge, it is really good to soothe a tummy that’s fasting for the whole day. Coconut milk helps in preventing or treating ulcer/ mouth ulcer.

So this comes as a rescue to those who are fasting. They use this kanji to break their fast.

Apart from this, the concept behind nombu kanji is, palli vaasal preparing it in bulk everyday. They serve it for free to all in the area who visits the mosque or pass by. Just like prasadam serving the purpose of feeding poor people apart from the sacred food offerings concept.

You can also use store bought coconut milk, but I prefer fresh ones. It feels light as well as no preservatives, stabilizers.

If you had tried this recipe, let me know your feedback in comments section. 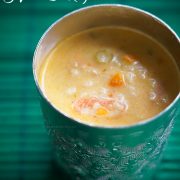 1. Wash rice and dal, keep aside. Heat a pressure cooker with oil. Temper with cinnamon, cardamom.

3. Tip in the ginger garlic paste. In goes tomato, vegetables. Saute for couple of minutes.

7. Bring to boil and simmer the flame. Add the coconut milk. Stir well and simmer for a minute. Switch off the heat when it just starts to boil.

Enjoy it warm the best. Since nombu kanji has coconut milk, please consume within 5-6 hours. You can refrigerate and consume if you know you can’t finish the same day. But refrigerate as soon as it is cooled.