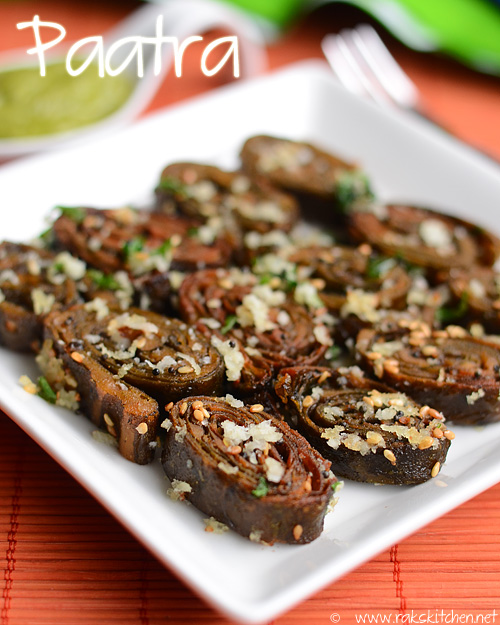 Paatra (patra) is a snack made with colacasia leaves (arbi / seppankizhangu/ taro leaves) along with spiced besan mixture and tossed to give extra flavour. Sesame seeds, hing and grated coconut add on the flavours to the dish. I always used to stare at the arbi leaves when ever I see it in Mustafa. I know they make a snack with it, but never knew any other details about it. I had a wish to try it out and don’t even know the name. Few month back, a reader(Anshi Kaushik) sent pictures of this one and I was so happy, asked her what it is called and how it is made. She was sweet enough to share the recipe. I also referred khana Khazana videos for more details about the recipe.
As I already had a wish to try this one, I totally enjoyed making this snack and Aj too loved to watch me making this. He helped me in picturing step by step pictures as he watched. He liked the taste too and have asked me to make it again. I am also eagerly waiting to try again as I like to make this as well as eat this. The process involving spreading the besan mixture is my favourite part as it was similar applying sunnambu in vetrilai (lime over betel leaves). I have seen, few times done it for my grandma during my childhood and only this is in mega size 😃. 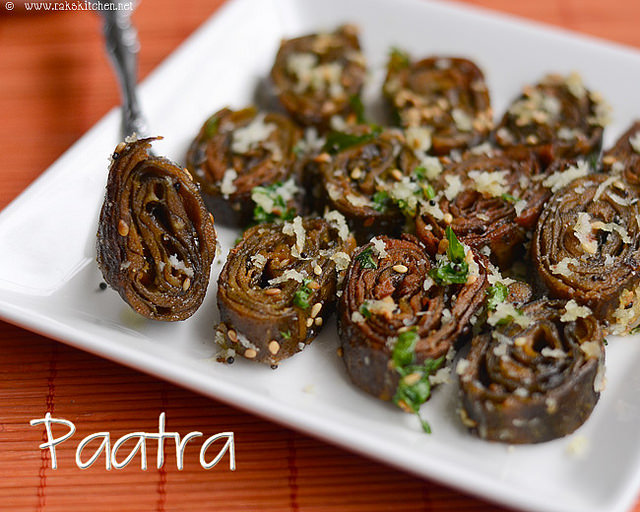 As it was my first time, only mistake I did was overcooking it. So the colour turned bit darker. But it did not look as dark as it is looking in the pictures as you could see in few of the step by step pictures, it was better. Due to lighting and camera settings it looked more darker in the pictures. I will try to update when I make next time.

Serve with spicy green chutney and its a winner!