Soya Nutri kulcha is a popular street food in North India, soya chunks served with Kulcha as a combo.

Soya chunks is a popular ingredient in India, a rich source of protein as well as fiber.

This is served with Kulcha typically, so make sure you prepare for that as well. If you like soya chunks recipes, do check out my sandwich with soya granules.

I adapted this recipe from here but made few changes.

There are many brands selling this such as Soya Nutri, Forture soya chunks, Nutrela etc. Soya chunks is also known by many names like soya meal maker, soya nuggets and also found in different forms as soya chaap, soya granules.

It is also available in different size, I used the small sized chunks variety.

See recipe card below, for quantities.

Is video more your thing? Check out my Soya Nutri Kulcha video.

This recipe is naturally vegan, but if you want you can add 1 tablespoon of ghee or butter along for excellent flavor.

See this soya chunks dry curry recipe on my website!

Leftovers can be refrigerated, it will be good for 2 days. But make sure you do not leave in counter top for long time before refrigerating.

The secret to a perfect tasting soya chunks recipe is cooking it perfectly. If undercooked, the texture will not be pleasing. Especially if you are trying to develop taste for it.

If over cooked, it will loose it's texture completely and become mushy. So ensure to cook it right.

Tea is added for color, as well as the taste similar to anardana seeds which gives an astringent taste. 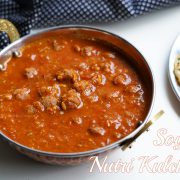 4. Once done, strain over a metal strainer. You can save this water use it later.

5. After draining, squeeze the soya chunks furthermore from excess tea and set aside.

7. After that, in goes finely chopped onion, green chilli.

8. Fry until soft and golden brown. After that, add ginger garlic paste. I used my garlic press since I did not had stock.

9. Then, pour in the tomato puree. (Just grind 2 tomato in mixer smoothly)

10. Following that, add all the spice powders.

11. Mix well and continue by cooking for 2 mins.

12. As we cook, the masala oozes oil and turns shiny.

14. Pour in the soya sauce and mix well. Almost for got important ingredient, haha. Close the lid, pressure cook for another whistle.

Serve with Kulcha as it is supposed to be served. They serve it in a different way by giving a dip in the gravy itself, but i served it this way with onion and coriander topped as I like it so.