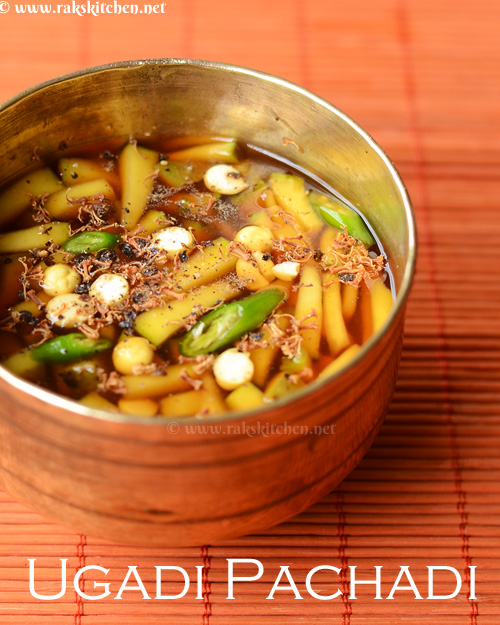 Ugadi pachadi is a special dish made on Telugu New Year day with six tastes in it, by tasting which on the new year day, we can face the six emotions in life equally.
Last Sunday I made this Ugadi pachadi in my cooking demo that I did in Pasir ris community club among the cooking interest group and few friends. Everyone loved this one. I made it with banana in it.
Today I thought of posting this as Ugadi special post. Very simple recipe, made with raw ingredients. There are many variants in this recipe, I have shared a simple one. I have made this few times and the final picture and video are made in two different occasions, so you may see some difference in the picture and video.
Disclaimer: This is my own take on the pachadi, and not claiming the traditional method.
Though fresh neem flowers, jaggery and tamarind water are used in the dish, I have used lemon juice, honey and dried neem flowers as I had no stock here in Singapore. If you do not have neem flower, use one or two neem leaf. Just tear and mix with the other ingredients.

Wishing you all a happy Ugadi, to those celebrating!

Ugadi pachadi is a special dish made on Telugu New Year day with six tastes in it, by tasting which on the new year day, we can face the six emotions in life equally.

*Roasted gram dal, cashews, chopped cucumber can be added to the pachadi.

Check out the event photos in my Instagram profile.